We reached our destination! Yay. We were assigned to drop our bags over at one of the tables before anything. I remember one of the first things that we were all told was about the eco toilet (which the place where you do the number 2). Btw, it was already lunch. Time to eatttt. The other kids went into the dining area already while I took a quick glimpse of the place. When I decided to join the rest I went up the small bamboo steps up to the dining area which was hovering over (with the aid of some concrete) the Moray Lagoon. The water was so clear and blue. Also, the reason to why the Lagoon had a Moray in it was because if you looked at the water you could see Moray Eels. They can look scary sometimes but also they made the water look lively if that makes sense.

As I stared at the dining area, I had no idea where to sit. Most of the tables were taken and I didn’t know where to sit. Also, I didn’t plan on sitting alone. And as I’ve mentioned before, most who came were with a relative or friend so they had a person to eat with.

I gathered my strength and decided to take a seat with a table that had 3 occupied seats. I said “hi” and we started to have a good conversation. In just a few minutes we all became friends.

While everyone finished their remaining lunch, one of the camp directors started introducing all the other camp members which we call ALs. Apparently, we were gonna be split up into four teams. Each team would be lead by one adult leader (or AL). All the AL’s each took turns in introducing themselves and their background about where they came from and why they’re in the camp. There was one scientist who came from Germany and who was going to teach us about fish and corals.

Also, we were told that for the answers that we got correct or for the behavior or actions that we did right we would get points for our teams. And of course, with being late or others our points could go down. Once we finished acquainting with our teams and AL’s, we all went out of the dining cabana and made a circle. Apparently, we were going to say our name and a dance. It went one way around the circle. When it reached my turn like everyone else, I shouted “LIBI!” and did this awkward dance move which everyone then shouted “LIBI!” and the same move. This was just a fun way to acquaint ourselves with everyone.

There are actually four cabanas for all the campers. Two are for the girls and two are for the boys. One of the main rules is that no boys allowed in the girl’s cabana and vise versa. There were about 5 girls in my cabana while there was about 7 in the other girl’s cabana.

When we finished preparing ourselves for swimming and trekking, we heard our call (KUUUUUWEEEEE (which is a bird call which came from one of the ALs)).

Anyways, back to the learning center. We were briefed about the island and the different beaches and lagoons. At this point, there were a few questions in which you could earn a few points from. We were also briefed about first aid and other things to be aware of while we do our trek. We were ready. We were instructed to bring our snorkel, other gear (if you have any), waterproof bag (if you need for things you want to bring which you don’t want to get wet), water bottle, sunscreen and insect repellent. If you forgot to bring your snorkel gear (just like me ;D) don’t worry! You could rent a snorkel or any other gear at one of the gear stall area on the island. All you have to do is sign your name and Tadaaa!

Because each team had its separate color (in my case, color white), we had to wrap a different color per team on the snorkel. We then headed out team by team. While passing one of the bridges, we saw big sea urchins at the bottom. Wanna know why they were hanging out there? Well, above the bridge is a bat cave. And, the bat cave goes all the way down. The urchins liked the bat poop. Mmmm.

We passed by turtle beach and typhoon beach. And, after waiting for the other teams at some sort of bar (rehydrating ourselves with some water), we swam to the beach reaching one of the far rafts with the ALs and our teams.

Good thing for the tapes wrapped our snorkels when the others were still snorkeling you could still identify which ones were part of your team. We were shown the different corals and fishes. It seemed to explode with colors! It was beautiful.

We made our way back with a sunset trek. The sky was orange and the light slowly made its way down. Our night ended with some dinner and finally a bath! Even though it’s only one bucket per person, I agree that it’s a good amount to use. Here’s the tip, use the tabo twice to wash away the sand and wet your hair, then shampoo and soap, then another wash. Done! You’ll probably have some leftovers.

Just before sleeping, we all sat around in a circle at the dining area after pushing away the chairs and tables to the side. One of the ALs told us that this was our community building and that it will be one of the only times we’ll be doing it. As we sat down in a circle, we shared what we enjoyed throughout the day and something we liked to build in our community. On a sheet of Manila Paper, a circle was drawn. Inside the circle, we would throw out ideas we would like to have in our community, an example, trust or respect for others. 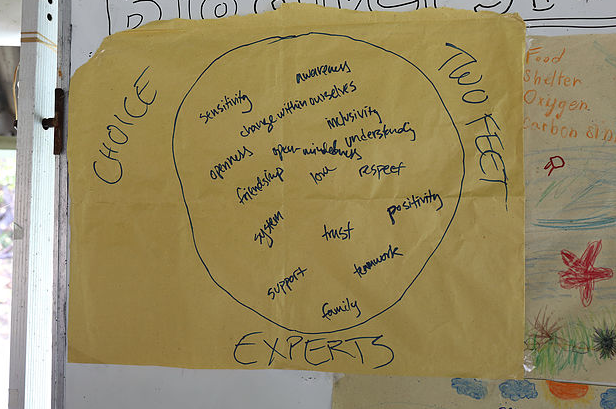 After this, we went to our cabanas and slept. Well, the truth is I talked to my roommates (cabana mates) before sleeping. We were having a small debate whether or not we should leave the chips in the cabana. Laziness kinda went around and we decided to leave the food in the room.

We put our mosquito nets properly around our mattresses and finally slept. 😉