The beginning: As WWII broke out as Britain and France declared war against Germany, the US took immediate measures as President Roosevelt declared they would be neutral. However, even though they didn’t join in the fighting, they did need money. So, in 1939, there was a Neutrality Act which allowed the countries at war to buy weapons from the US under the condition that they pay cash and they carried the weapons and arms on their own ships. It was sort of a win-win situation for the United States at the moment, they made cash, weren’t under any of the terrors that came along with war, and everything seemed smooth sailing for them……. for now. 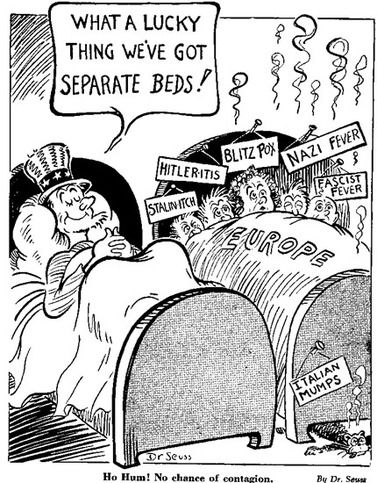 Roosevelt’s Goals and Visions: In 1940, Roosevelt is re-elected president for a 3rd term. His primary goal was to aid Britain in defeating Germany. On January 6, 1941, Roosevelt delivered the Four Freedoms Speech, which became one of the most famous speeches in American history. In this speech, he expressed his vision of having the American ideals of individual liberties extended throughout a world already engaged in war. He ended his speech with a descript of the four essential human freedoms which are:

Norman Rockwell, who was an American author, painter, and illustrator, was so inspired by Roosevelt’s speech that he created paintings reflecting each one of the freedoms described. The paintings he made were turned into war bond posters. Rockwell raised $130,000,000 for the government. Yup, pretty big amount, I know.

Arising tensions: A German U-boat fired on an American destroyer. After this incident, American ships were adviced to follow a “shoot-on-sight” policy toward German submarines. Germans torpedoed and sank the American destroyer Reuben James in the North Atlantic.

Japan, on the other hand, had a vision and attempts to create an empire which was conflicting with the U.S.’s goal of maintaining an open trade policy in Asia. Also, by June 1941, Japanese aircraft posed a direct threat to the British Empire. In response to this, the US froze all Japanese assets in the US, placing an embargo on them, and reduced the amount of oil and steel shipped to Japan.

Entering the war: The Japanese decided to attack British and Dutch colonies in Southeast Asia for resources, seize the Philippines, and attack Pearl Harbor! In was on December 7, 1941, when Japan attacked Pearl Harbor sinking or damaging 25 ships of the U.S. Pacific Fleet, killing 2,403 Americans, and injuring hundreds more. Due to this atrocity, President Roosevelt declared war on Japan. Then, on December 11, 1941, Japan allies- Germany and Italy- declared war on the US. *BOOM* and, that’s where it began.